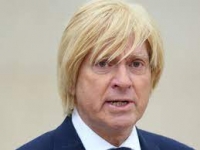 UNIVERSAL CREDIT - A Tory MP known for his staunch loyalty to Boris Johnson says benefits should go up 'immediately' after paying a visit to his local food bank. Michael Fabricant's call for Chancellor Rishi Sunak to act came after what he called a 'very useful meeting' at the resource in his Litchfield constituency.

The veteran backbencher admitted people on the breadline cannot afford to wait until later this year for an increase in line with inflation. He added it was "important not to politicise foodbank usage" and said politicians should work together.

He said in an update on his website: "I have this morning tabled Parliamentary Questions to Rishi Sunak the Chancellor of the Exchequer and Therese Coffey the Secretary of State for Work and Pensions urging them to uprate benefits immediately in line with inflation rather than in the autumn which is the usual time for such changes. I believe this is necessary as the rate of inflation due to the war in Ukraine and the embargo on Russian oil has caused world grain and fuel prices to soar.

"People on the breadline cannot afford to wait until later this year. I will also be taking other steps and look forward to working with the foodbank as and when the need arises."

Mr Fabricant said he met with the chair and other volunteers of Lichfield Foodbank on Saturday. He added that use of the food bank in his constituency was low but "ought to be lower, if non existent". The MP has previously made headlines for his loyalty to Mr Johnson in the media, including repeatedly defending the PM from criticism over the so-called 'Partygate' scandal. He insisted voters simply wanted the PM to "get on with his job".