CONTEMPT CLAIM - The Tories are accused of "contempt" for the poor after refusing to sack a candidate who said people on Benefits Street should be "put down".

Boris Johnson 's welfare chief refused calls to axe Francesca O'Brien over vile comments she made in 2014 - despite a massive backlash.

Work and Pensions Secretary Therese Coffey said it will be "for the people of Gower", not Conservative Party chiefs, to decide if Ms O'Brien becomes an MP. 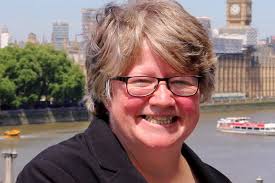 Tory sources confirmed her thinking reflected that within the party.

Ms O'Brien, who is standing in the Welsh marginal seat in the general election, made the comments on Facebook in 2014.

She said: "Benefit Street ..anyone else watching this?? Wow, these people are unreal!!!" In response to a friend, she added: "My blood is boiling, these people need putting down."

Yet Ms Coffey refused to back dropping Ms O'Brien as a candidate today when she was grilled by BBC Radio 4's Today programme.

Labour chairman Ian Lavery unleashed an instant attack on Ms Coffey. He said: "Removing a candidate who used such vile language about people on benefits should be a no brainer.

"The cuts to benefits and Universal Credit programme that Therese Coffey and her party are responsible for have forced people into poverty.

"It is shameful that Boris Johnson is allowing Francesca O'Brien to stand for his party in Daily . This reveals the Conservatives' contempt for the less well off."

Ms O'Brien made the comment at the time the controversial show aired on Channel 4. 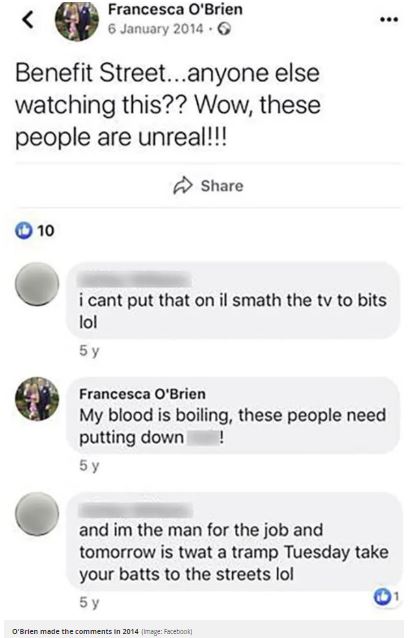 O'Brien also apparently endorsed a friend's suggestion for "twat a tramp Tuesday" to "take your batts [sic] to the streets".

The candidate apologised, telling The Guardian: "These comments were made off the cuff, a number of years ago. However, I accept that my use of language was unacceptable, and I would like to apologise for any upset I have caused."

"It shows a jarring lack of empathy for those who maybe haven't been afforded the luxury of growing up in a nice house, having a private education and working for the family business - there is no self-awareness.

"I deal with cases from people who, through no fault of their own, claim benefits. How could they expect any help from someone who doesn't think they should be given this support?"

ABC Note: All political parties are trying to score points off each other. This incident has attracted a LOT of attention and will surely affect the outcome of the election of an MP in a marginal seat and it has highlighted the callous approach of the government to benefit claimants.